One of the most reliable ways to earn money on the internet is to offer content to other webmasters. That will be articles in most cases, but could also extend to photographs or infografics or things like that if you have an artistic streak.
Indeed, quite a few really successful Internet Marketers started their Internet career by writing and selling articles to others. One of those is Josh Spaulding, a Marketer I really like and respect.
He has written a short eBook that teaches you everything you need to do to succeed – and believe me, it is not just theory, it is how he started himself. It is a way for Josh to give back to the marketing community, so he decided to give it a way for free. Have a look for yourself, you can download the eBook below: 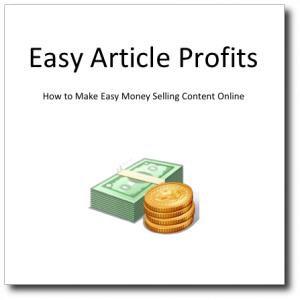 Logo for my new company needed

You could do me a favor and vote for one of the designs shown here:

Clean up your link profile or just disavow links?

In a recent video Matt Cutts introduced the link disavow tool. In very short words, this tool gives web masters the opportunity to basically tell google: “here is a list of links that are spammy and that I could not get rid of”.
So why do the tedious clean up work at all? You could just go to your webmaster tools and disavow the links instead of trying to remove them. Is that a wise idea? Is it possible at all? Caution! There is a little sentence in that video that many might have ignored. Google is going to do a before/after analysis of your link profile regardless of any disavowed links. Only if there is a difference google will see your efforts in really trying to clean up. I would consider the disavow feature as only a last resort if there are links that you can’t get removed even after trying to contact the other webmaster several times.
Last but not least, for whom is that tool? I would only consider using it if I got an unnatural links warning in my webmaster tools. I would certainly not use it as a preventive measure as that might even trigger a manual review when up to now there only was an algorithm ranking loss.

Here is the complete video, so you can make up your own picture:

I admit it – I ignored Facebook as long as I could because I did not like the idea of chatter and everyone sees everything.

But from a business point of view this was a mistake – Facebook done correctly can be a great means of finding new prospects and of spreading the word about what you have to offer.

Especially when you manage to leverage the main powers that drive people in Facebook:

The interest in what your friends do and sheer curiosity!
Maybe you have already seen that sometimes you can access certain content only when you click the like button.
Have you ever wondered how this is done?
How you can make your readers want to reveal that treasure trove behind the like curtain? 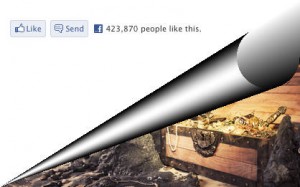 I will explain in the following:

The Penguin Update is not exactly new any more – there was time enough to dive into the data and have a look what distinguished the Google Penguin Update Losers from the Winners. One of the best experts to do an analysis like that is Christoph Cemper. Why is that – because he has one of the best toolsets in the industry at his disposal and he is a renowned specialist when it come to link building and link analytics.
Click on the infographics above and read the complete case study.

To be honest: This is one of the few times when I got curious from a promotion email I got.

Usually I get one or two of those per day as I want to see what all the IM “Gurus” (what a silly word…) are promoting. I rarely buy one of those products as I don’t like the hype that comes along. And usually I don’t think they come at a price that can be justified…

But today I am going to test Andrew Fox’s “Nuclear Affiliate” – Maybe the good price point convinced me (I first did not want to buy, but when I closed the page I was graciously offered a $10 discount as “one of only 5 customers” – wow, maybe you are as lucky as I was, I reckon 5 can be stretched a little bit 🙂 )

If the system convinces me, I will write a report here…

P.S.: Sorry Andrew if I revealed the price loophole here…

Get traffic with Internet videos

“1000 Visitors in 24 Hours” – that is the title of a 30 page report written by Jonathan Leger. Yes, that is the same guy who made 3waylinks.net, InstantArticleWizard.com and a whole lot of other great SEO/Internet Marketing stuff.

With broadband internet access widely available, video has gained an enormous popularity – especially with the younger audience. Obviously there has to be a lot of money in that market, otherwise Google would not have paid $1.65 billion for YouTube!

Jon has found an easy to follow way to benefit enormously from the video hype – and to actually convert viewers into visitors. He describes a method, how he managed to convert 25% of his viewers to visitors… and not only that: the conversion rate from those visitors again was more than 10%!

His “1000 Visitors in 24 hours” Article is a detailed, easy to read, no-questions-left report, that I can only warmly recommend. “1000Visitors in 24 Hours” is in two ways different from a lot of the other stuff you can buy all over the net:

1. It is not overcharged – at a modest $7 you get a report that is worth far more than every cent of it.

2. Jon has this certain attitude – he won’t sell anything that he didn’t thoroughly test himself – and he publishes all his statistic data so you can have a look at the numbers yourself. I cannot imagine a better proof.

P.S.: If you wonder how many videos Jon had to create to achieve his 1000 visitors in a day goal… It was ONE. Just one video. Now think what you could achieve if you just created a couple videos… Check out “1000Visitors in 24 Hours” and find out for yourself!

How to get “Awesome Links”

Getting links is not easy and getting good links is even harder. So what about awesome links?
Rand Fishkin, CEO of SeoMOZ has a wonderful way of explaining, so have fun watching the video below:

SEOmoz Whiteboard Friday – How to Get Awesome Links from Scott Willoughby on Vimeo.

What is this about?
I want to support the mission circle Ayopaya (sorry there are only a few pages in english as it is a german organization) in its efforts to create a better life for people in Bolivia – the poorest country in South America.

How will this be achieved?
I want to get more backlinks for the mission circle’s donations page and hope tho encourage more people to give a donation however small it may be (believe me 2€ or 2 $ can make a difference!)

What is in for you?
Two things: First of all I will reward you with a backlink to your site from my website here (seo-traffic-guide.de) As your link points to ayopaya.de and my backlink comes from seo-traffic-guide.de this is Semi-3-way linking and will be seen as a one way link by google.
Second: On Epiphany I will check the referral statistics on the ayopaya webpage a will have alook who of the participants of my little help contest here will have sent the most traffic to the ayopaya page. The winner will receive a copy of Joel Comm’s latest book “Click here to order”

So what do you have to do?
Set a link to the ayopaya.de page, use one of the mentioned anchor texts, write me an email or use the contact form to tell me where your link is located and what site you want your backlink pointing to (don’t forget to include a good anchor text for your backlink)! Encourage people to visit the ayopaya page via your link to increase your chances to win your copy of Joel Comm’s book.

Well, of course there is a solution for exactly that, too:

It is called PlusLocker, and you can see it in action here:

Click here to get your copy:
==>PlusLocker WordPress plugin

SEO All in One Solution

Sign up to my newsletter and receive a free SEO eBook

My name is Michael Busch, I have more than 10 years of experience working in the IT sector, in various areas such as internet access and proxy server administration or developing online shopping applications, as well as systems administration. On this blog I share my knowledge on what it takes to make a website successful.

No donations within the last 90 days.
Want to see your link here in this cloud? Make a small donation over here.